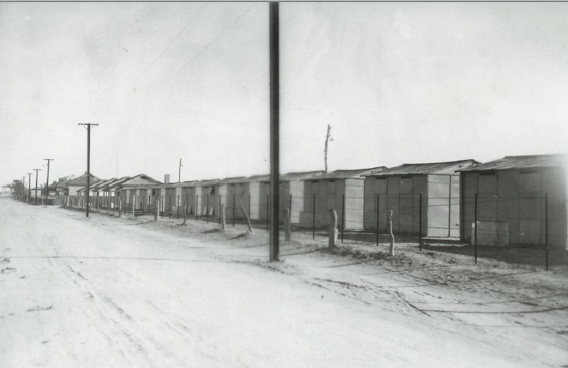 This is the story of Port Pirie Staging Camps in World War Two.

During World War 2 the 14 Australian Personnel Staging Camp was located at Prince’s Park, Solomontown, Port Pirie to feed and accommodate troops joining or leaving trains at Pirie Junction (Solomontown Railway Station). Pirie Junction was created in 1937 to accommodate the broad-standard passenger interchange and included minor narrow gauge facilities. Pt Pirie South yard and the eastern “subsidiary sidings” provided the freight interchange between the three gauges. These components made up the truly three gauge ‘station’. ¹ The marshalling yards frequently held military trucks, tanks, armoured cars, Red Cross vehicles, and other artillery pieces and auxiliary equipment ready to be deployed to a forward area. Hundreds of troop trains stopped at Port Pirie before going to Western Australia with their Australian or American battalions bound for war in the Pacific.

There were about 30 huts of prefabricated construction for troops described as 16 feet x 12 feet with a door, 8 opening shutters and a malthoid roof.

Tents were also set up with board flooring; and at one stage Captain. T.H. Lonnen (Officer Commanding the Camp) appealed to the public to provide matting or carpet or anything that provided padding to provide more comfort. There were mess and canteen facilities where meals were provided; an ablution block, a recreation hut which included a donated piano, a women’s restroom, a sergeant’s mess, a Y.M.C.A War Service Hut and a Red Cross Thumbs Up Hut.

Red Cross Aids and Transport Service frequently met at Pirie Junction helping sick and wounded servicemen passing through. They gave the men fruit, milk, cigarettes, playing cards and books to speed the men on their journey overland and carried stretchers from one train to another. They also provided breakfast for invalids at the Staging Camp.

This story was collected by the Port Pirie RSL to preserve the history of people in their local community.