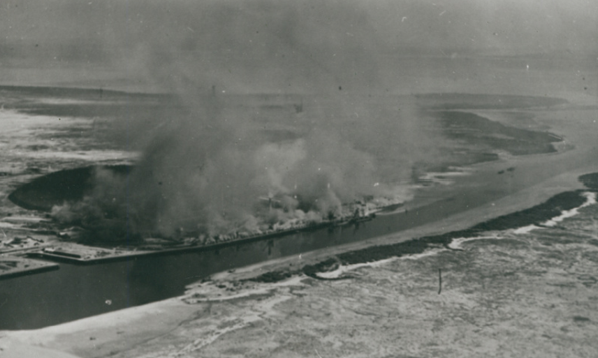 This is the story of how the Port Pirie Smelter was involved with World War Two.

The Port Pirie smelter was contracted to sell 13,875 tons of lead (at £18 16/7 Australian currency per ton) per calendar month to the British Government for the period of the war and three months after; which absorbed the equivalent of about 91 per cent of total production. (Based on the figures for 1938).

Zinc was also to be sold to Britain under a similar contract, so that the two principal constituents of Broken Hill ores had a certain market; thus Port Pirie’s future was a sound one.

Smelter produced Sulphuric acid was sent to Penfield, South Australia for concentration and mixing with nitric acid made on site to provide the acid mixtures required for making TNT and tetryl.

Within a year of the outbreak of World War 2, production of munitions had expanded rapidly in the eastern states, Adelaide and Whyalla. Civic leaders in Port Pirie demanded to be involved in munitions and component manufacturing because Pirie “stands alone in industrial performance”.

By 1940 the war had created new demand for copper. Copper ore from Mount Gunston, South Australia begun treatment at Port Pirie smelter for the production of copper required for munitions.

A prominent Port Pirie businessman Mr. R.J. Bowden offered the Federal Govt. 47 acres of land free of charge to build a munitions works on it for the Empire cause.

Certain small parts for munitions were being manufactured on a small scale in Port Pirie by March 1941; and by late 1942 approximately 250 people were employed forging and machining 25 Pounder QF (quick firing) shell casings in the annexe building at Port Pirie Smelter.

Close approach of war to Australia forced the Smelters Accident Fund to insure members against mishap or death by air raid.

Port Pirie was the first centre outside of Adelaide to undertake air raid precautions; this was prepared by the management of the Smelters . Smoke Screen tests were conducted to combat ‘would be’ air raids upon local industry / military targets.

This story was collected by the Port Pirie RSL to preserve the history of people in their local community.