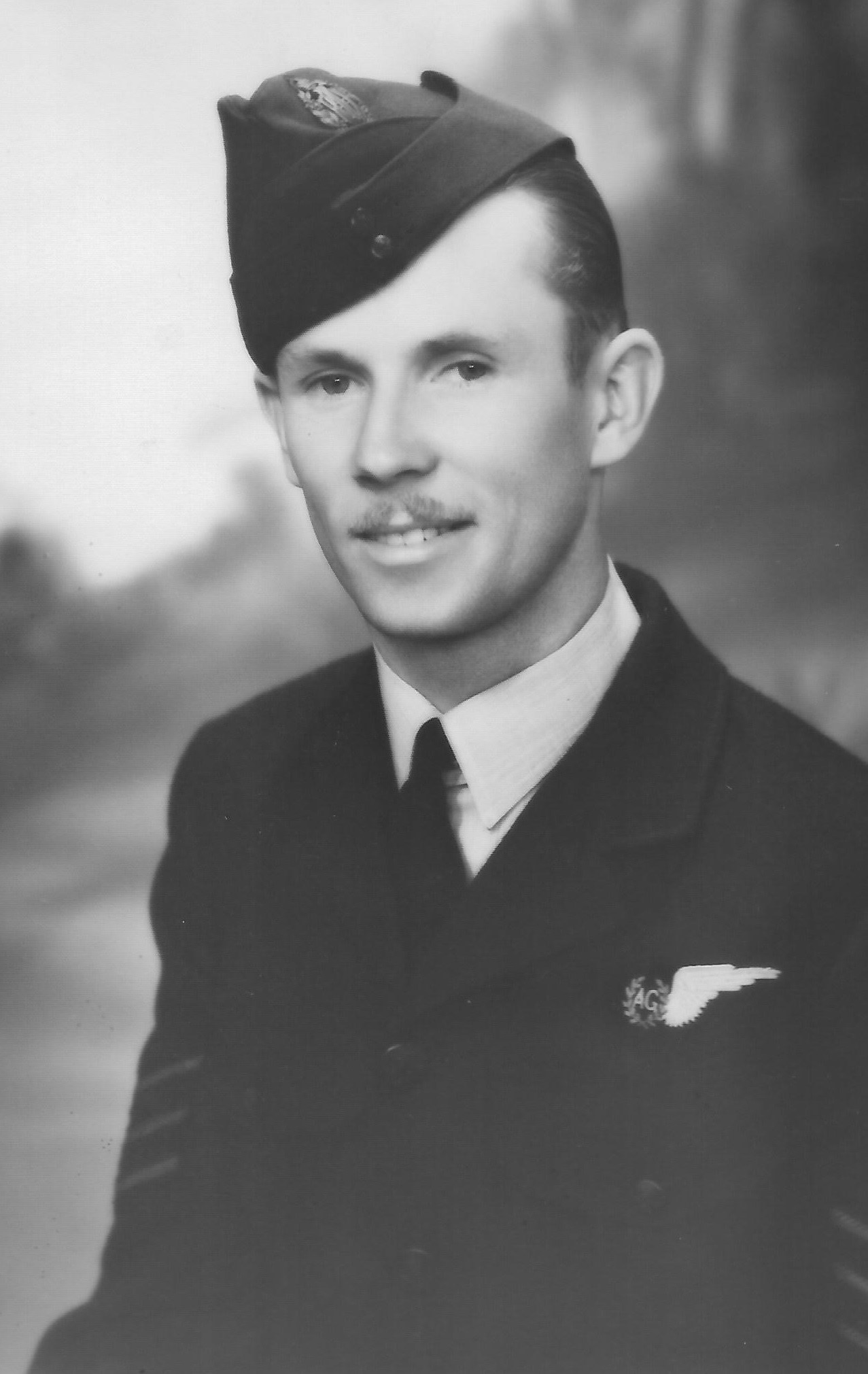 Maxwell Elliott Whitehill (Max) was born in the town of Gawler, South Australia, on the 29th of April 1913; the first child of Herbert Adam and Ethel Whitehill (nee Elliott).  Herbert worked in the office of a small drapery establishment in the town.  One year later almost to the day (1 May 1914) a second child – Joyce Margaret (author’s Mother) was born in the same town. The family shifted not long afterwards to Adelaide acquiring a house at 18 Wellesley Avenue Evandale, an eastern suburb of Adelaide some 3 miles (5kms) from the city.  Herbert became the Office Manager, then later the Accountant of what is now Myer Stores.

Max attended Wellington Road Primary School from 1925 -1928 (Gawler Primary School prior to that). There he obtained his Qualifying Certificate in English, Mathematics, Composition, History and Geography.  Indications are that he was more technically directed in his studies rather than toward academic subjects.  He undertook correspondence studies for a period before studying aero-engineering part time from 1935 – 1938 at the South Australian School of Mines (now the University of South Australia).  His first job was as a Salesman with the Myer Emporium (now Myer Stores) and he remained in that position until enlisting with the Royal Australian Air Force in 1940, under the Empire Air Scheme.

He qualified as a pilot with the Royal Aero Club with 30 hours as a licensed pilot and was a member of both the 3rd and 18th Light Horse.  Scouting was his teenage passion and he became a King’s Scout in circa 1930. In his application to join the RAAF he lists swimming, tennis, wrestling, weightlifting and horse riding as his sporting activities.

Not a particularly big man – 5’-9” high and weighing 127 pounds – Maxwell Whitehill applied to join aircrew with the RAAF in December 1939.  He was accepted for enlistment on his 27th birthday, 29 April 1940 with the rank of Aircraftsman – service number 407022.  Although he applied to be trained as a pilot given his earlier training and flying hours, he was posted to the Wireless Air Gunners School in Ballarat on 28 May 1940, graduating from the course as a Leading Aircraftsman on 10 July 1940.  During a period of leave he married Jean Bessie Kirkwood in Adelaide on 17 August 1940.

He was promoted to the rank of Sergeant on 13 January 1941, prior to his departure for the United Kingdom on 1 February on board the troop/cargo ship the Memnon, a 7,500 ton vessel under Captain J. P. Williams that was bound for Liverpool via the west coast of Africa with its consignment of servicemen, crew and general cargo.  Calling in at Capetown the ship sailed for Freetown, Sierra Leone, then on 9 March 1941 sailed from that port bound for its assigned destination of Liverpool.

Three days later and making a zig zag course, the Memnon was suddenly hit by a torpedo fired from a German submarine.  From war service records it has subsequently been determined that the German submarine was the U106 commanded by Jurgen Oesten.  (German war records indicate that Oesten survived the war and died in August 2010).  The Memnon was hit on the starboard side, immediately started taking water and within 15 minutes had completely sunk.  According to the official report of Captain Williams, two lifeboats were lowered with “22 (men) in our boat and 44 in the other boat in charge of the Chief Officer”.  Max Whitehill who was in the latter lifeboat records in his subsequent letter back home, “we waited round for thirty hours in case someone had heard our S.O.S. and then started on our long trip to terrafirma”.

In the haste to abandon ship six crew members who were working below deck went down with the ship.  A distress message had been sent out which was answered by a Spanish steamship however, no assistance was forthcoming.  Having come to the surface the German submarine made no attempt to fire upon or assist the lifeboat occupants and it eventually submerged.

It was estimated that at the time of sinking the Memnon was about 400 miles from land (nearest point Dakar) and on 13 March the two lifeboats, powered only by sail and a hand operated propeller, proceeded on what was to be a long and hazardous journey to the African coast.  Two days later the decision was made for the two lifeboats to separate as the larger craft was slowing progress.  Max Whitehill was in the larger, slower craft.

Max Whitehill’s letter back home records the perilous journey; “our rations were half cup of water, two biscuits and a square inch of bully beef a day…….On the eleventh day one man died of exposure and we had to bury him at sea, two days later we sighted land…..Later in the day we found a native fisherman and he informed us that we were just north of (the French town) of St Louis.”

St Louis is some 100 miles north of Dakar and just over 200 miles from Bathurst, the closest British territory.  The decision was taken to not land at St Louis but continue on to Dakar even though by this time several of the men were in a bad way.  Reaching Dakar on 23 March they were advised by the captain of a French ship in the harbour not to go ashore, but rather continue on to Bathurst.  After receiving water and food from the French ship that advice was accepted and one day later the exhausted company arrived in Bathurst to an enthusiastic welcome by the RAF personnel stationed there.  The perilous journey had taken 13 days.

Meanwhile the second smaller lifeboat had also reached Bathurst and all the survivors were taken to the RAF base to recover from their ordeal.  Three weeks later they were flown to Freetown by the RAF and from there, after further recuperation, proceeded on to their original destination – Liverpool.

The South Australian newspaper The Advertiser reported their arrival in England on 16 July 1941 “five months after they left Australia for England”.  All of the surviving RAAF personnel were then posted to various RAF stations.  Sergeant Max Whitehill was initially posted to Finningley, Doncaster where he was “engaged in instructional duties in gunnery”.  He was promoted to Flight Sergeant on 1 September 1941.

On 2 February 1942 Flight Sergeant Whitehill and a Sergeant Rollins wrote to the RAAF Overseas Head Quarters in London requesting that “Owing to the present situation in Australia and the Far East we respectfully submit application for posting to Australia”.  A quick reply on the same day from Wing Commander E.G. Knox Knight declined the request stating, “…we who have been sent overseas must rely on the Commonwealth Government to decide where Australian forces are best located for the defence of the Commonwealth”.

Following his promotion to Flight Sergeant, Max Whitehill requested a transfer to operational duties.  His subsequent posting to 49 Squadron at the Scampton air base in Lincolnshire on 3 April 1942 saw his first active participation in air raids over Germany.  His initial sortie was in a Hampden bomber (AD 870) in a bombing raid on Essen.  In the months that followed he flew 9 operations, 4 in Hampdens and 5 in Manchester bombers.

(It is worth mentioning here that the Manchester bomber was a most unreliable aircraft.  Powered by twin Rolls-Royce X24 Vulture engines it was slow and the engines were prone to failure and catching fire.  The Manchester was withdrawn from service at the end of June 1942 and replaced by the Lancaster bomber, a four-engine aircraft powered by Rolls-Royce V12 Merlin engines) 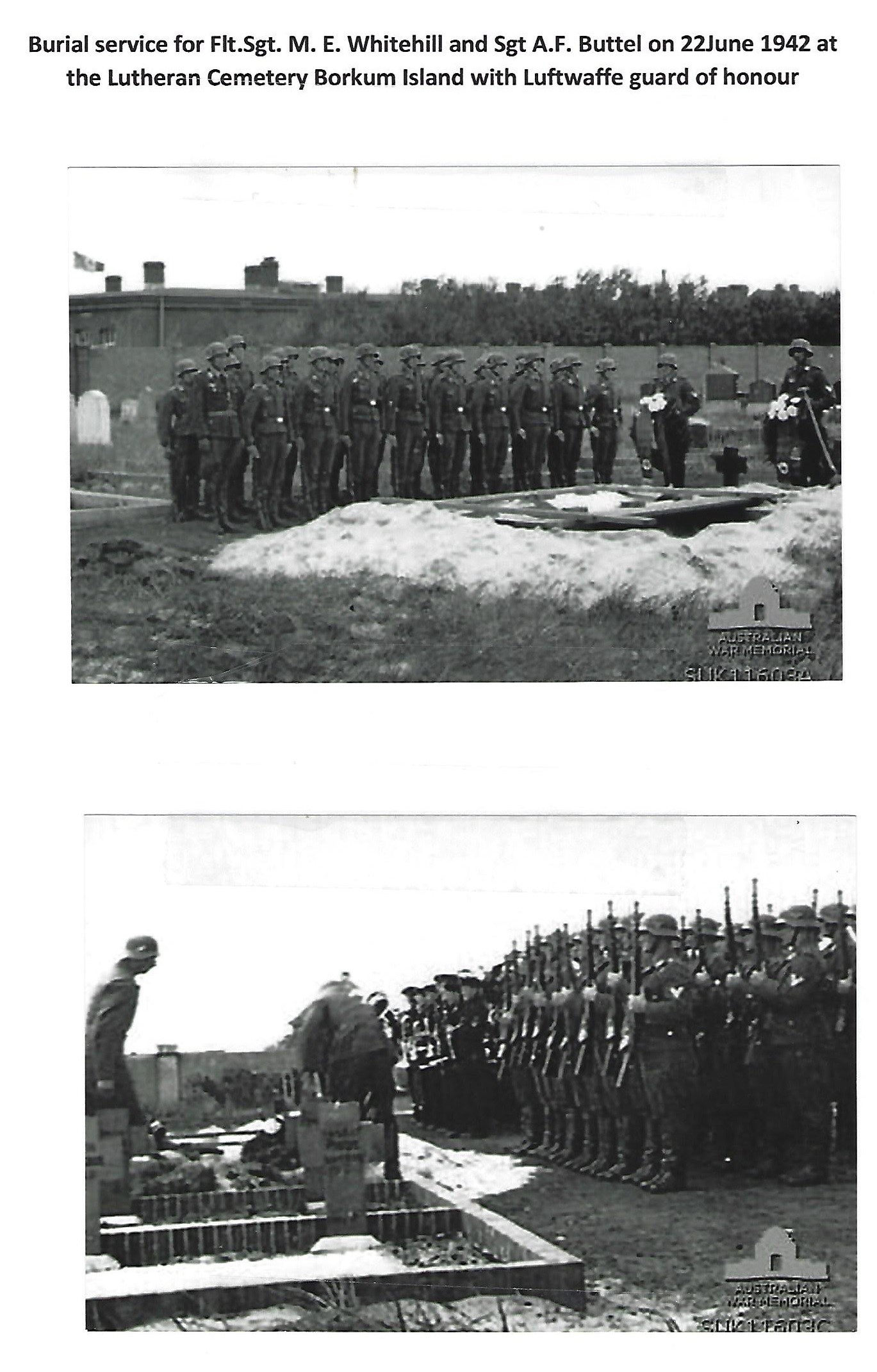 Flight Sergeant Max Whitehill flew his final mission on 6 June 1942.  In Manchester bomber L7469 he with 6 crew members with A/Squadron Leader Peter de Mestre as pilot, took off from Scampton on a scheduled bombing raid on the town of Emden.  Max Whitehill was mid-upper gunner on that fateful mission.  In good weather conditions, a main force of 233 aircraft from several airfields set out that evening to attack Emden.  49 Squadron dispatched 7 Manchester bombers from Scampton at 23.30hrs with only 5 returning – Max Whitehill’s Manchester was one of those not to return.

It is recorded that Manchester bomber L7469 was shot down at 00:20 hrs, 20km North West of Borkum Island on the morning of 7 June.  It had not reached its bombing target and crashed into the North Sea.  There were no survivors.

German war records indicate that L7469 was shot down by Luftwaffe pilot Oberleutnant Ludwig Becker.  Reportedly flying a night fighter Bf110F Messerschmitt  (see photo attached), Becker himself was shot down and killed on 26 February 1943 by an American B-17 Flying Fortress during a daylight sortie.

It is ironical if not tragic that a little over 2 weeks following the loss of L7469, the Manchester bomber was withdrawn from active service and replaced by the more reliable and faster Lancaster bomber.

On Monday 22 June 1942, a German patrol boat recovered two bodies from the sea, one being identified as Flight Sergeant M. E. Whitehill, the other, Sergeant A. F. Buttel, second pilot of the ill-fated L7469.  Other crew members of the aircraft were listed as Missing in Action, later presumed dead.  Their bodies were never found and were presumed lost with the crashed aircraft in the North Sea.

On the same day (22 June) the two recovered bodies were taken to Borkum Island and buried with full military honours in a funeral service at the Lutheran Cemetery. Australian War Memorial papers record that “the funeral was attended by a guard of honour from the Luftwaffe, headed by an officer, a German naval band and two wreath bearers”.  The service concluded with an address by the Chaplain, a presentation of arms by the military detachment and a firing of a salvo.

At the conclusion of the war, the remains of Flight Sergeant Whitehill and Sergeant Buttel were exhumed and reburied in the Sage War Cemetery, Oldenburg, Germany. 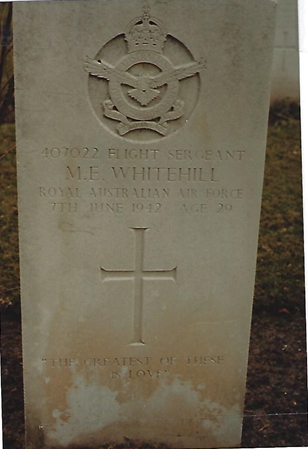 This article has been researched and written by Graham J. Inns AM, sole surviving male relative of F/S M. E. Whitehill and provided to Veterans SA with permission to publish.

Research into this war service project commenced in 2008.  The author acknowledges with thanks the many people and organisations who provided material to put this history together.  None more so than Colin Cripps, Research Officer of the 49 Squadron Association.  The late Alan Parr, President of the 49 Squadron Association, also provided valuable guidance, as did personnel from the Australian War Museum and The National Archives.  Other material was obtained by personal research and family papers now held by the author.

The article was completed on the 29th April 2021, the 107th anniversary of Maxwell’s birth.  In March 1984, the author of this war service history visited the grave of his late uncle, Flight Sergeant Whitehill, in Sage War Cemetery, Oldenburg, Germany